Our drier is nothing fancy. It’s a Kenmore, and it has actual buttons and knobs, not digital displays and computer components. It was cheep, it’s paid off, and it works. Or at least, it did up until last weekend. Then something happened. We aren’t sure what, but what used to take only an hour to dry took more than three. Yes, three.

Something was definitely wrong with our drier.

Now, my dad works on washers and driers all the time at work. He works for Harding University in the general maintenance department, and keeping the washers and driers working is a part of his job. So when our drier went on the fritz, I gave him a call. After talking the problem over with him, we found what we thought was the problem: a wasps nest in the vent.

Here’s a picture I took of it. It wasn’t that big as far as wasp nests go, but it had blocked up lint and some water in the pipe. I talked the the apartment manager, and they put their maintenance people on it to get it cleaned out. They did. Problem solved, and just in time, too. I had laundry to do.

That was Wednesday. Friday, I started another load of laundry. And I discover that the problem wasn’t fixed. It still took me three hours to dry my laundry. I ended up putting the laundry out on the patio to finish drying. 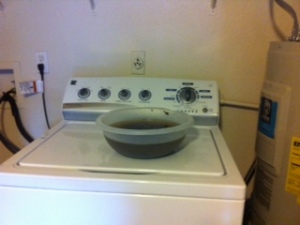 I gave my dad another call, and after further conversation I decided to pull the dryer out from the wall to check the flex hose. I thought perhaps it was full of lint–a fire hazard I wished to avoid. Instead, I found about two inches of water and soggy lint in it.

And if that wasn’t bad enough, I decided to stick my hand up the pipe to see if I could feel the clog and pull it out myself. Instead, I found more water. A lot more. In fact, I managed to pull more than a gallon of water and lint from the pipe.

Readers with weak stomachs, I apologize in advance. Here is a picture I took of the water I took from the pipe. As you can see, it’s a lot of water. And there was still more water left in that pipe that I couldn’t get to. And yes, the water was gross. I’m gagging just remembering it.

The pipe, by the way, was more flex hose, and best I can gather it runs underneath the bathtub. Why it’s flex hose and not something rigid, like PVC, I don’t know. Maybe PVC wouldn’t fit under the tub. Maybe it’s regulations. I don’t know. But going back to the point:

A gallon of water. Something is seriously wrong with our dryer.

There are two possible explanations.

According to my dad, this kind of dryer either works or it doesn’t. It doesn’t peeter out and little by little stop drying until it stops working. It just stops. And since my drier is still putting out heat, my dryer is working just fine. Which means there’s something wrong with the pipes.

I could just have a mega clog that’s been there for forever, a clog that the maintenance people couldn’t get to when they cleaned out the wasp’s nest. A clog that’s real old could explain the gallon of water I pulled out of the pipe.

But if that pipe re-fills back up with water . . . that means I have a plumbing problem. Something is leaking into the pipe. And that could be a very big deal to fix.

Unfortunately, I can’t talk to the apartment manager until Monday morning. Until then, I’ve got to figure out some other way to do our laundry, because I’m running out of underwear. And also, I’ve got to stick my hand back into the hole in the wall to see if the pipe has filled back up. I’m really, really, really, not looking forward to that, but it’s not something I can hand off to my husband to do. I wish I could, but his hands are so big he can’t even get them into the pipe. No way he could get his arm half-way up the pipe to clean it out like I can.

Oh, gag. Shudder. Not looking forward to it.