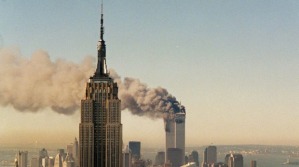 When 9/11 happened, one of the most popular questions to get asked was, “where were you?” Everyone wanted to know where you were when you found out about the attacks.

So here’s my story.

Like most everyone else my age, I was in school. I was in 10th grade, and about to go into history class. I heard about some kids talking about it in the hall and had no idea what they were talking about. Some kind of plane crash? Then, of course, I got to class and found out exactly what was going on.

So, I didn’t see any footage of plane crashes or buildings collapsing until that night, when I got home and watched the news. Until then, I had to make do with listening to the chaos on the radio and try to figure out what was going on. It was kind of hard, actually. I had no idea what the Twin Towers or the Trade Center was.

Pentagon, yes. I distinctly remember hearing about the Pentagon and thinking, “They got the Pentagon?” I thought the place had gotten bombed. I had no idea about planes or terrorists until later that night.

Honestly, I don’t believe anyone knew what was going on for several days at least. But we all expected to go to war any second. We all were wondering when the president would dig the nuclear bombs out of storage and who we would drop them on. And don’t you know if it had been a country instead of a terrorist organization, we probably would have done exactly that.

When we found out it wasn’t a country, I know some people were disappointed. Many wanted to drop nukes anyway. We were that angry. Me, I was confused. Terrorists attacked us, not a country? Why? I was so naive, I’m not sure I knew what a terrorist was before then.

Of course, I know better now. I know a lot more things now than before.

How that event changed me

I don’t know if I can say how exactly that event changed me. I was fairly young when that happened. The best I can say is I was educated in a lot of things I wasn’t before. I became less naive. The world and far off places suddenly took on new, vivid meanings. I suddenly started to care about politics. And hate for a group of people I didn’t know existed came into being.

Not in me. I don’t hate the terrorists, or Islam or anyone else Americans like to associate with those atrocities. I know I’m one of the few people who can say that.

But I see that hate in so many other people. Get most any American to talk about September 11 and who was responsible for it, and they’ll speak just as nastily about them as others would about Nazis and the concentration camps.

That was one of the worse ways America was changed. And I find that sad. We don’t love or trust as we used to. We can’t go back, but wouldn’t it be nice?

Where to go from here?

It’s been fifteen years. For many of us, this event is still fresh. For others, this event is already just another page in our history books. One day, that’s all it will be. Maybe it’ll become a memorial day, like Pearl Harbor day. By then, we who remember will be old and gray and out of touch.

Then one day, we’ll all be dead and that event will be forgotten completely. Other tragedies will take its place.

I have to keep this in mind. Tragedies will always be out there. Bad things will always happen. Something worse may be in store for me, personally, and I won’t have any idea that it’ll happen until it does.

But I can’t get hung up on those far off events, or on the things that have already happened. I have to keep my focus on God. He’s my guide and my God. He lights my way.