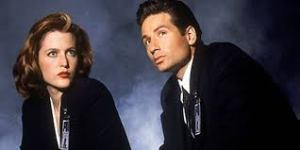 Last week, my husband and I started watching the X-Files for the first time. Not the new remake, but the original series. Neither of us has ever seen it, though I’m old enough to remember when they first came out. I didn’t expect to like it–and I didn’t at first. But by the third episode came around, I was hooked.

Character development isn’t something you see much in TV anymore–or even in a lot of books. Which is a shame, because it can contribute a lot to the plot and conflict. I’ve found that flat or cookie-cutter characters to be boring. They just don’t hold my attention.

The X-Files did more than develop characters. From the moment we meet Fox Mulder and Dana Scully, we aren’t just meeting cardboard cutouts. They stand on their own two feet, as real and complex as the writers could make them, with obvious weaknesses to balance out their strengths.

Dana Scully is logical, clear-headed, and intelligent, but she also has a tendency to be closed-minded. Fox Mulder is just as intelligent, but because he believes in the unbelievable, has a tendency to come across as being crazy. He’s also reckless, a workaholic, and so focused on his goals and beliefs as to wear blinders. It doesn’t take long before they both respect each other’s abilities, and later–if what I’ve heard about the series is correct–come to love each other. Mulder and Scully are as opposite as two people can be, but is it any wonder they come to love each other when they complete each other so well? No.

What I took from the series

We haven’t finished watching the series yet, so I’m sure I’ll have plenty more to add to this before it’s all said and done. What they writers did with Mulder and Scully is basically my new writing goal. To somehow create compelling characters that you fall in love with–if not on first sight, then second–with strengths that aren’t completely unbelievable or over the top, while weaving in obvious weaknesses without driving people away.

Sounds difficult? You have no idea. And I want to do it. If I could do that with my books, then I could create a story that readers will want to go back to time and again.